“I am Dog” is a fairy tale for adults, told by a child. It unfolds through a series short interactions between a girl called Willa and her friend Dog. Existing in a world of almost complete isolation, Willa and Dog’s exchanges are inquisitive, funny, sometimes heroic and often cruel. By the final scene, Willa is gone and Dog sits alone, contemplating a world submerged in water. “I am Dog” can be read as a kind of internal monologue – two sides of the same personality – or as the antics of two young beings exploring life together. 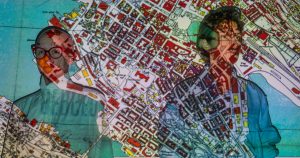